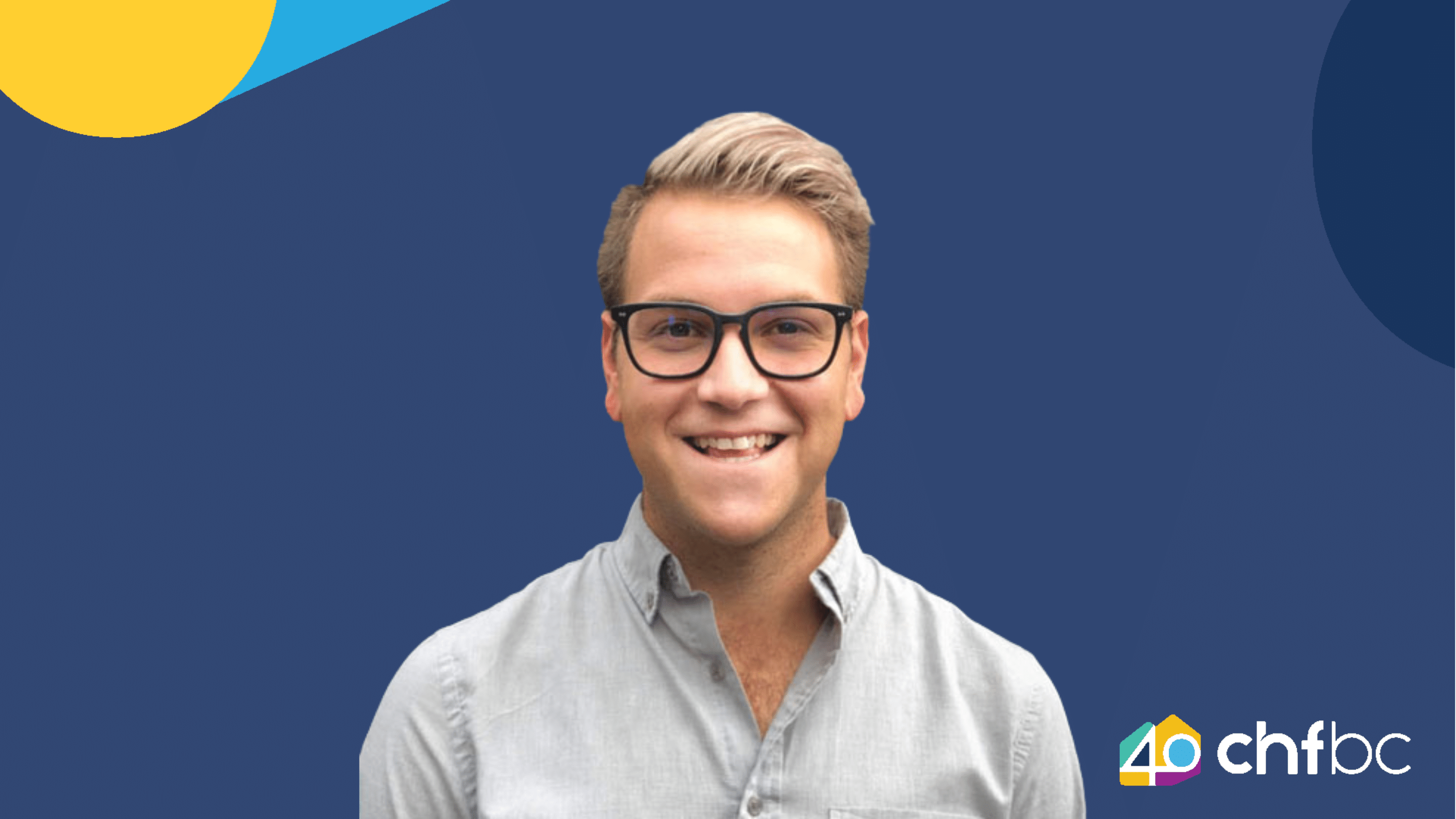 Jarrett has been fortunate to have lived in and been an active member of Emma G. Housing Co-op for the past 11 years.

He currently lives with his husband Zach and an amazing community of neighbours they wouldn’t want to be without. Since joining the co-op Jarrett has held the positions of; Secretary, Treasurer and President.

Professionally Jarrett has spent the last 10 years working in progressive politics, and most recently served as special assistant to Premier John Horgan

The last 4 years on the CHF BC board have given Jarrett deeper understanding of the Community Land Trust, COHO management, as well as the needs and concerns of our members.

Highlights of Jarrett’s recent board term were working on the governance committee and the board executive.  Helping to draft and pass an emergency resolution to support the call to declare that we are in a climate emergency at the CHF Canada AGM.  He was very proud to see our membership create a Climate Emergency Task Force that membership approved last CHF BC AGM.

Jarrett’s time on the board has strengthened his appreciation for the hard working staff at CHF BC as well as the members that make CHF BC such an amazing organization.

Cheryl worked as a Senior Maintenance Coordinator in the housing co-op sector for over ten years and during this time did everything from managing routine repairs to coordinating large retrofit projects and everything in between. Cheryl also trained and coached staff in maintenance coordination and brings dynamism and humour to her work.

Larry has a background in community mental health and behaviour change and has served on the board of directors, maintenance committee, and membership committee at his own co-op, Marine Court. Larry’s expertise is in organizational development and training and offers a range of innovative engaging workshops, as well as insightful board coaching and trouble-shooting. Larry is also a trained facilitator for the Co-op Compass initiative.

Ed has worked in the co-op housing sector for over ten years. Currently, Ed works as Co-op Services Advisor with CHF BC delivering services to new co-ops, support to all co-ops through CHF BC’s member inquiries team and developing educational resources. Previously, Ed worked for a co-op management company as a coordinator and senior manager. Ed has experience in building management and supporting board governance through training and planning.

Brian has been an activist within the co-op housing sector since 1990.  He has lived and worked in co-ops and has been on the board of local  and national federations.  He has worked as a manager in a number of housing co-ops and is familiar with different operational and program systems.  He is a skilled meeting chair and workshop leader.  Brian is always excited to help housing co-op boards and members achieve their operational, planning and community development goals.

Grant Haddock was called to the Bar of British Columbia in 1992 and is the principle of Haddock & Company. His core areas of practice are co-operative housing law, strata property law, residential and commercial tenancy, human rights, privacy and construction law. Grant has acted for numerous housing providers and construction companies, appearing for them at all levels of court and at various tribunals. Grant has been a course leader and frequent speaker at educational conferences sponsored by industry leaders.

David is a founding member of Quebec Manor Housing Co-operative, where he still lives. He has served as director, treasurer and president of the co-op. He served as president of CHF BC in its early days and in 2012 was again elected to the board. In addition to his involvement with housing co-ops, David serves or has served on other co-op boards, including Modo, Co-operators Group Limited and the BC Co-operative Association. David mostly offers chairing services and has particular expertise with Model Rules 2.0 and with the British Columbia Cooperative Association Act.

Terra has more than 25 years of experience working in the co-operative sector. She has resided in two different housing co-ops starting in 1985. Terra worked with a housing co-op management company where her principal responsibilities included client and employee recruitment, maintaining client loyalty and the day-to-day supervision of close to 50 on-site and off-site property managers. Terra is known for her in-depth knowledge of the housing co-op sector and her area of expertise is in privacy legislation (PIPA).

Pat has been a member of Paloma Housing Co-op since 1985 and was Program Manager, Member Relations for the Co-operative Housing Federation of Canada from 1995 to 2009. She was also previously on the CHF Canada Board from 2012 to 2018, and currently serves on the CHF BC’s Aging in Place Committee. Pat’s area of expertise is community-building and governance workshops with a current interest in the topic of aging in co-op communities. Pat is also a trained Co-op Compass facilitator and has assisted many co-ops through that process.

Sue has been active in housing co-ops and federations in British Columbia and Quebec for most of her working life. From 1997 to 2014 she was CHF BC’s Education Director.

Now a CHF BC consultant, Sue chairs meetings, facilitates workshops and provides advice on co-op housing governance issues. She is also an engaged member in her own housing co-op in Vancouver.

Chris is a registered social worker who lives in False Creek Housing Co-op. Chris’s area of expertise is in conflict resolution and mental health social work. Chris is a trained group facilitator and therapist. He has assisted co-op members on a number of challenges and has facilitated difficult conversations among members, boards and committees. Chris also delivers CHF BC’s workshop ‘Mental Health in your co-op community’, and has facilitated several workshops on Mental Health and the Law with Geoffrey Dabs.

Jordan is a Certified Professional Accountant and has been working as a Property Accountant for more than 10 years. Currently he works as Asset Management Program Analyst with CHF BC. In this role he helps member co-ops to access professional planning services and financing, making sure that co-ops remain viable, sustainable and able to provide members with good-quality housing. His expertise is in accounting and financial management, as well as long term planning for housing co-ops.