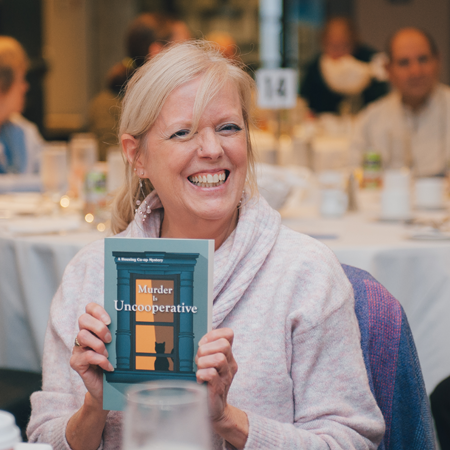 CHF BC held an AGM unlike any other on Sunday, November 20 in Richmond in tandem with the launch of Housing Central: BC’s Affordable Housing Conference. 170 co-operators started the day with a delicious lunch where they heard from keynote speaker Kishone Roy, CEO of the BCNPHA. Roy welcomed CHF BC members with an enthusiastic and hopeful message about the future of our strategic alliance with the broader affordable housing sector.

The annual meeting got off to an exciting start with a visit from BC’s Minister of Justice and Attorney General, Hon. Suzanne Anton.  Anton, who is also the MLA for Vancouver-Fraserview, a riding that includes 1,200 co-op homes, shared the news that the BC government will extend $2 million in assistance to the 22 co-ops with CMHC agreements that expired prior to April 1, 2016. You can watch that announcement here. These co-ops were not covered by the subsidy extension recently announced by the federal government. This additional assistance will make housing charges more affordable for more than 300 low-income households until September 2018. It will be administered by CHF BC on terms very similar to the co-ops’ former section 95 agreements with CMHC.Brooksford Place Co-op in Abbotsford is one of the co-ops eligible to benefit from this assistance. The co-op’s CMHC agreement expired in 2015.

Sammy McMurphey is the co-op’s Key Campaign “champion” and was pleased with the announcement. “…I’m so happy as one who’s worked so long on behalf of Brooksford!”

Eligible co-ops will receive more information from CHF BC very shortly. Keep an eye on your mailbox for good news!  This announcement is the latest good news in our You Hold the Key campaign. We’ll be working hard with you in the upcoming provincial election to secure a permanent solution for low-income co-op members.Instead of the standard board report, members watched a short video created to highlight CHF BC’s accomplishments over the past year. The video tells the story of  CHF BC’s new brand, and features our new Telecom program, the CHF BC scholarship program, news from our You Hold the Key campaign, new co-op homes under construction through our community land trust, and examples of the investments co-ops are making in their homes through our asset management planning program. You can watch the video here. No annual meeting is complete without an election. Eight candidates stepped forward for six positions on the CHF BC board. Yuri Artibise, Erin Gilchrist, Larisa Gorodetsky, and Cassia Kantrow were re-elected to new terms on the board. We also welcome first-time directors Bob Lewis and David Maier. Anne Davidson was acclaimed to serve on the Finance Committee. The meeting also honoured David Lach who had served on the CHF BC board since 2012. Lach has a long history with CHF BC as a past-president and was instrumental in founding CHF BC back in 1982. In a special member forum, Tim Ross from CHF Canada led a discussion about the future of the co-op housing movement in Canada. The national federation is leading a visioning project called Our Movement Our Future which will lead to a discussion at CHF Canada’s 2017 annual meeting next June. It’s not too late to sign up and get involved in the conversation. Let’s be sure to include as many BC voices as possible. The first 25 delegates to arrive at the meeting won a copy of Merrilee Robson’s Murder is Uncooperative, a murder mystery set in a Vancouver housing co-op. Robson attended the AGM and signed copies of her book. Other lucky winners took home great prizes from CHF BC’s group buying partners.

Our staff and members followed the meeting on social media with the hashtag “housingcentral”. You can see our meeting story on Storify.Members who attended the AGM said it was fun, inspiring and full of valuable information to take back to their co-ops. We can’t wait to welcome you to our semi-annual meeting next spring.