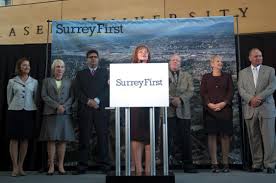 Parties and candidates who made housing co-ops a priority in their campaign platforms did extremely well in Saturday’s civic elections.Co-op-friendly slates and candidates for council and mayor won big in Surrey and Vancouver.  And affordable housing advocates in New Westminster, Port Moody, Victoria and North Vancouver also met with success after the ballots were counted.In Surrey, Surrey First won the mayor’s chair and every seat on council.  Surrey First has promised to work with city-owned Surrey City Development Corporation to create co-op housing and a land trust for affordable homes.Vision Vancouver saw Mayor Gregor Robertson re-elected and a majority elected to council. Vision has pledged to prioritize co-op housing by leveraging city-owned land to build new co-ops in partnership with the sector, and to champion the protection of housing co-ops with expiring leases.Green Party of Vancouver leader Adriane Carr topped the polls in the race for council seats and has said that she will support housing co-ops by resolving land lease issues and facilitating loans for co-op renovations through the City’s new Affordable Housing Agency.Other notable winners backing co-ops and affordable housing options include Mayor-elect Jonathan Cote in New Westminster, North Vancouver Mayor Darrell Mussatto and Mayor-elect Lisa Helps in Victoria.CHF BC is pleased to see the attention given to housing co-ops at the municipal level.  We look forward to working with municipal leaders and officials across the province to turn those campaign promises into action that will benefit new and existing housing co-ops and their members.Images:Surrey First party wins in Surrey.Lisa Helps is the mayor-elect in Victoria.Adriane Carr got top votes for council in Vancouver.Gregor Robertson was re-elected as mayor in Vancouver.Jonathan Cote is mayor-elect in New Westminster.