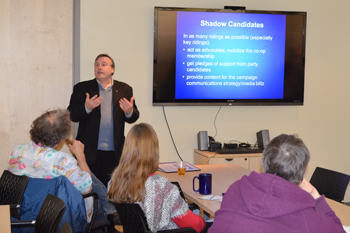 Following the launch of CHF BC’s provincial election campaign the morning of April 15 at Lakewood Terrace Housing Co-op in East Vancouver, the monthly Member Forum that evening saw a second launch. CHF BC and CHF Canada members reviewed all the campaign activity to date and talked about the background and campaign key messages. Members also learned about the role of shadow candidates, and discussed the best ways to make sure all parties and candidates learn that they “hold the key”.To learn more about the election campaign go to CHF BC’s Election Central.