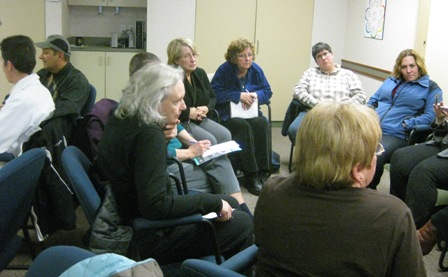 A packed room and a hot topic saw CHF BC and CHF Canada members engaged in lively discussion about “aging in place” at the November 14 Member Forum.Dianne Brubaker, CHF BC director and co-chair of CHF Canada’s Aging in Place Committee gave a brief report on the committee’s work, and members viewed some of the statistics from the committee’s member survey. After the break, the room broke into two groups that tackled the questions:  “What can co-ops do to tackle the challenges?” and “How can CHF BC and CHF Canada best help co-ops respond to them?”.Just some of the suggestions included that co-ops create their own “aging in place” committees, develop standards and policies for renovations that include universal design, and earmark some reserve money for aging in place initiatives.  There was also the suggestion that federations should continue to lobby the government to make grants available to co-ops and to provide co-ops with lists of aging in place resources.Feedback from the Forum was sent to CHF Canada’s Aging in Place committee.The next Member Forum will be in February 2012 with a look at “co-op insurance 101”.For more information, get in touch with Fiona Jackson at fjackson@chf.bc.ca or 604-879-5111 ext. 139.