Honouring our Past, Shaping our Present, Building our Future 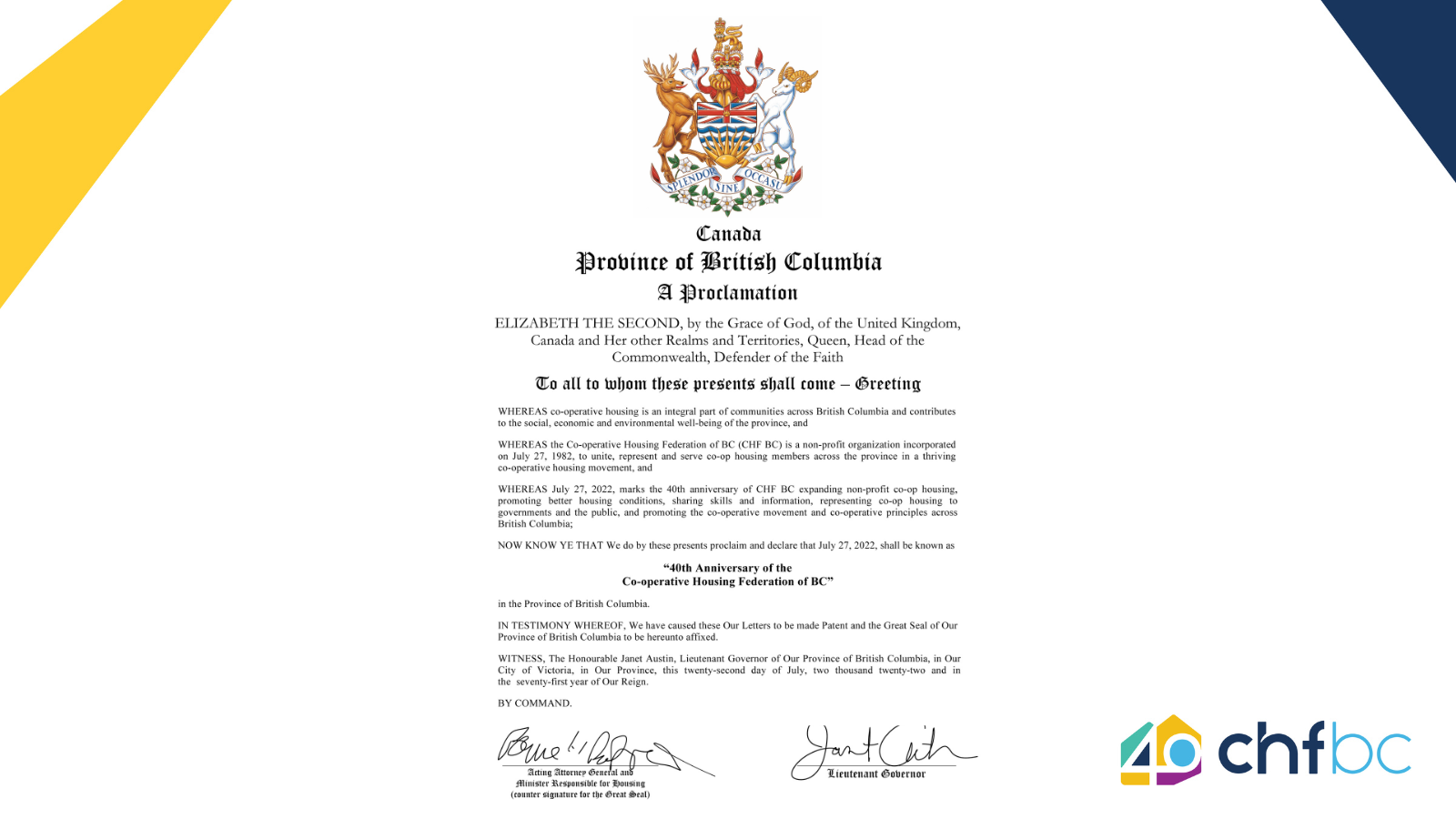 In the 1980s, everything was big – big hair, big cars and, for a group of innovative co-op housing champions, big ideas.

Forty years later those ideas are the foundation of an organization that is making a big impact in the co-operative housing movement and the community housing sector, both in BC and across Canada. As the Co-operative Housing Federation of British Columbia celebrates 40 years of supporting and growing co-op housing, its founders and leaders reflect on transformative milestones – and what’s to come.

Founding board member Merrilee Robson recognized the need for a local federation during discussions at a CHF Canada meeting in 1980. “We found it useful to meet with other housing co-ops… but things were different at the time,” Robson said. “Nowadays we would do a webinar or Zoom meeting but there was none of that! Landlines and snail mail were the only way to connect with CHF Canada.”

The need for CHF BC was clear, and the group of local champions set about creating a federation that would provide a way for housing co-ops to share information, be able to meet each other, advocate for BC housing co-ops, and have access to local education and services that understand how housing co-ops are operated.

Fresh off the process of creating a housing co-op to save her rental building from being sold, Suzann Zimmering was also keen to continue advocating for the sector. “CHF BC has been a leader from the beginning,” she recalled. The founders quickly identified several areas where housing co-ops needed support: lawyers and legal advice, accounting, property management, bulk purchasing, and advocacy. Today, those programs and services are integral to CHF BC’s success.

“Those incorporators had such a bold vision, and they anticipated many of the things we’re doing now,” said Thom Armstrong, CEO of CHF BC.

He pointed to the creation of COHO, the first sector-owned housing co-op management company, in 1984 and to the land trust beginnings in 1993, as key moments in CHF BC’s history. Launching the group buying program – particularly the CHIP program that has delivered millions in bonus interest and been replicated among federations across Canada – is another big highlight, while the fight for leaky co-ops was CHF BC’s defining political movement, Armstrong added.

It hasn’t always been easy, and like any organization, there have been bumps along the way. But CHF BC’s focus on a members-first philosophy, and its foundation in the international co-op principles, have guided the path. Well, that and a healthy dose of stubbornness at times, joked Robson.

“It’s partly vision and partly hard work and tenacity, and a firm belief that if co-ops need something there has to be a way of providing that,” she added.

With a history like that, CHF BC is well positioned for a bright future.

Armstrong looked to CHF BC’s role in the community housing sector – a concept unique to BC – as a source of strength and growth for the future, drawing on the principle of co-operation to advance the goal of secure, affordable housing for all.

“For a small non-profit organization I think housing co-ops have been pretty darn good at advocating for their members,” said Robson, the most recent example being the purchase of two housing co-ops in Burnaby to safeguard them from private investment.

“The opportunity to become central to the ambitions of all three levels of government to create, maintain and steward a permanently affordable stock of community housing – that’s at the front end of where we’re going,” added Armstrong.

Resilience and adaptability will underpin CHF BC’s work in years to come, noted Robson and Zimmering, whether it’s creating ways for seniors to age in place, breathing new life into aging co-op buildings, responding to new challenges, or adopting a new vision that remains relevant to members.

As Cassia Kantrow, past board chair of CHF BC, said at the Spring Education Conference, “Agility is really crucial to the organization, and maintaining that ability to respond to opportunities that arise.”

Whatever the future holds, CHF BC’s leaders past and present know it will always be driven by the members – the principle that inspired the organization in 1982 and guided it for the past 40 years.