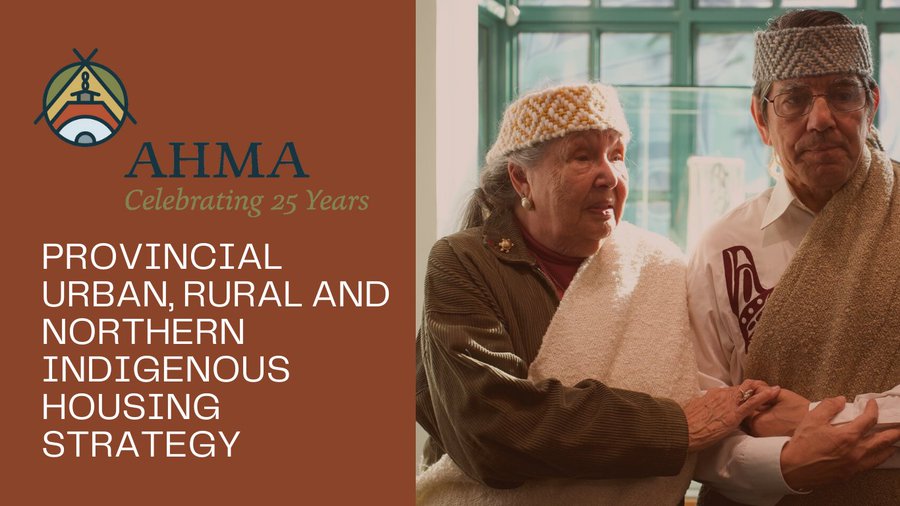 AHMA’s strategy was created in response to the federal government’s failure to create a National Housing Strategy that included the urban Indigenous population.

The Provincial Urban Rural and Northern Indigenous Housing Strategy is part of AHMA’s long term vision to provide culturally safe, secure, and affordable housing to all Indigenous Peoples in British Columbia. It offers a blueprint for AHMA and its members to move forward in partnership with Indigenous, First Nation, and federal and provincial governments, as well as with key stakeholders and service providers.

Implementing the strategy supports implementation of Canada and BC’s commitments to UNDRIP and is a key and critical step in improving the lives of Indigenous people in the province.

It was developed after a year of in-depth consultation with Indigenous organizations, community members, housing, and service providers. An Indigenous Advisory Council guided the entire process, providing expert advice and traditional Indigenous knowledge to ensure the strategy responds adequately to the unique needs of Indigenous Peoples.

The strategy outlines a 10-year plan to address the housing needs of off-reserve Indigenous people in BC. It outlines the vision, objectives, principles and strategic actions. It also includes an implementation plan that identifies funding, resources and activities for successful implementation.

CHF BC congratulates AHMA for this landmark accomplishment. We looks forward to listening, reflecting, and working with AMHA to ensure that the BC Urban, Rural and Northern Indigenous Housing Strategy gets funded and implemented in a timely fashion,

In 2017, the federal government released the National Housing Strategy (NHS), which focused solely on developing “distinction-based” Indigenous housing strategies. This distinction-based approach, however, fails the 79.7% of Indigenous people who are not living on reserve.

AHMA’s provincial housing strategy is a direct response to the failure of the federal government and NHS to address the housing rights violations experienced by Indigenous people residing in rural, urban, and northern communities in British Columbia