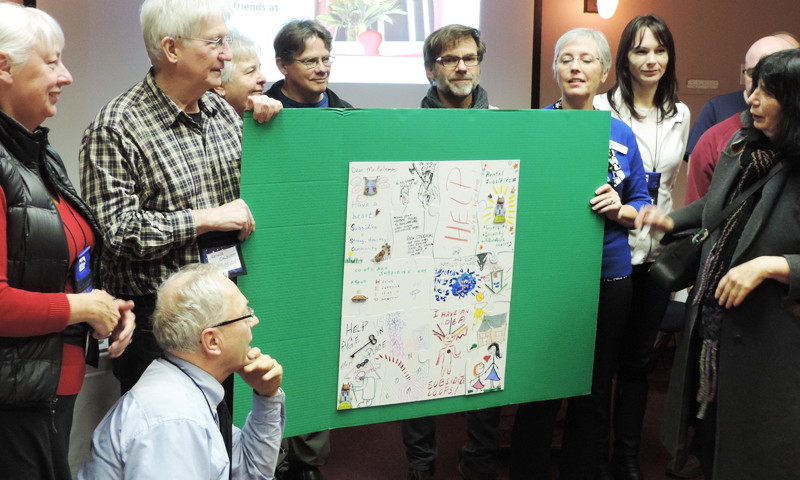 CHF BC’s Vancouver Island members came together for a packed meeting on Wednesday, February 26, to discuss council business and hear updates  from CHF BC’s board. Michael Rodgers, CHF BC’s Co-op Viability Advisor, gave an update on changes to the Refinancing and Renewal asset management program. CHF Canada president Anne Davidson and Member Services Director, Miriam Trotscha gave a report and encouraged CHF Canada member co-ops to send a delegate to the CHF Canada AGM in Ottawa this June.  In the special member forum portion of the meeting members took part in a “your piece of the puzzle” event focused on CHF BC’s You Hold the Key Campaign.Members decorated giant puzzle pieces to express their hopes and fears about what the end of co-op operating agreements and loss of subsidy will mean to them and their co-ops. They worked in groups to create complete puzzles, and a spokesperson for each group described their messages in the completed puzzles. All CHF BC members are encouraged to get involved the campaign.A big thanks to the meeting sponsor Jordan’s Flooring who provided refreshments, brought product samples and gave out door prizes.Photos: A group of Vancouver Island members with their completed puzzle.Rod Cooper (Orchard Green) accepting door prize courtesy of Jordan’s from Island CHF BC director Art Farquharson.