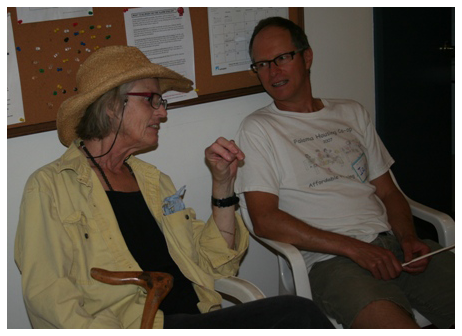 In celebration of 2012, the International Year of Co-operatives (IYC), housing co-ops clustered in the Commercial Drive neighbourhood of Vancouver began meeting early this year to form a local “co-op cluster” to plan ways to celebrate IYC, make connections between housing co-ops and encourage housing co-op members to support their local co-op businesses. The cluster decided to create a co-op map pamphlet that would highlight local housing co-ops and co-operative businesses.One of the cluster organizers, Pat McClain from Paloma Housing Co-op, explains. “Our goal was twofold: to raise the profile of co-ops in the International Year of Co-operatives, but also to make it easier for co-op members to network with other co-ops.”The group has now completed a draft version of the map. “We envision co-ops will give it to new members and distribute it to local co-op businesses,” says Pat.  The map will help co-op members learn about co-operative businesses in “the Drive” neighbourhood and to become more aware of other housing co-ops in the community.On Saturday, August 18, the co-op cluster also organized a “roving co-op potluck”.  The idea was to have fun, visit neighbouring housing co-ops, and to network. They also unveiled the draft of the map pamphlet.Here’s how the roving potluck worked: Co-op members met for appetizers at Sitka Housing Co-op, then went “up the street and around the corner” for dinner at Paloma Housing Co-op. After dinner they travelled several blocks further to one of the scattered co-op homes of Van East Housing Co-op, a 100-plus-year old heritage home, where they shared dessert.  At each location, visitors had a co-op tour.Four co-op cluster members organized the event. Three local co-op businesses, NOW BC, DevCO and Vancouver Tool Library took part along with seven housing co-ops. In total 46 people attended.The cluster plans to continue what they’ve started and to continue to meet and network. On its member blog Van East Housing Co-op calls the group “the East Van Co-op Cluster Conspiracy.” Caer Weber of Van East Housing Co-op took part in the roving potluck. “It was really a fun event and especially fun having three different co-ops host a part of the meal. I’m hoping we do something like it again next year!”