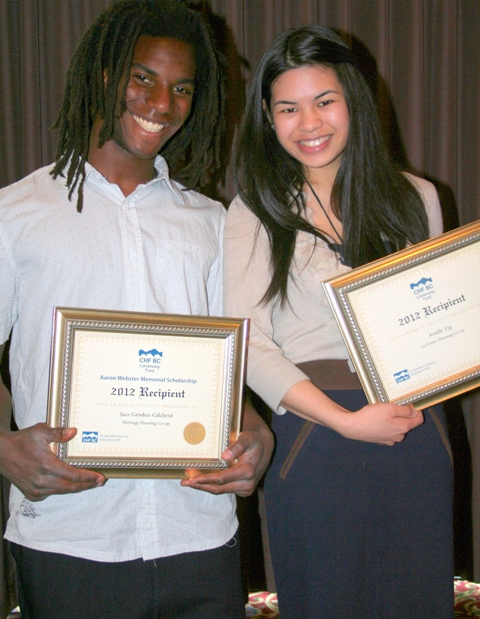 CHF BC members turned out in record numbers on Saturday, May 5 for the Federation’s 2012 Semi-Annual General Meeting.  They left on a high note, ready to tackle the challenge of building a sustainable co-op housing movement.The runaway highlight of the meeting was the presentation of the first two scholarships in CHF BC’s new Scholarship Program.  The vice-president and executive director of the Co-op Housing Federation of Toronto made the long trip to be here on that special occasion.  Members were also energized by a presentation from Chelsea Lake of the BC Co-operative Association on how the YES Camp program develops young leaders.Delegates worked on a new mission statement for CHF BC and adopted a resolution mapping out a plan to guarantee a strong and sustainable future for the co-op housing sector.  They also heard from the board about some exciting new initiatives, including a plan to invest in co-op enterprise in the developing world, a new Aging in Place committee, refinancing opportunities for housing co-ops, a new Model Rules project, and the challenge of replacing subsidies for low-income members when operating agreements expire.There was just enough time left to approve a budget and member dues schedule for next year and to hear from CHF Canada on the latest happenings on the national scene.Join us on December 1 for the CHF BC annual general meeting.Photos below: Scholarship award winners: Jazz Groden-Gilchrist of Heritage Housing Co-op, winner of the first Aaron Webster Memorial Scholarship and Arielle Dela Cruz Yip of Le Coeur Housing Co-op, winner of the first CHF BC Scholarship Fund award.CHF BC members work together on a new mission statement for CHF BC.Members share their version of a new mission statement for CHF BC.See more photos on our Flickr page.