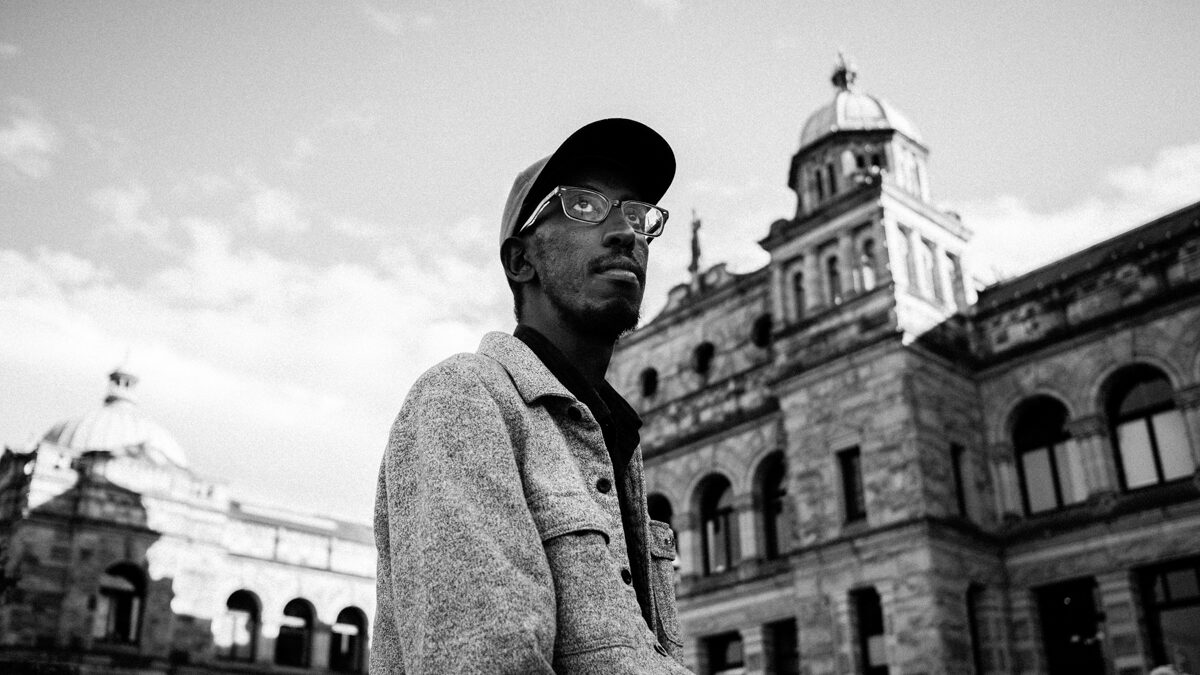 "Everybody doesn’t need to own a house if we invest in co-ops and housing affordability." —Sharmarke Dubow

The path to home has not been an easy one for Sharmarke Dubow, but the challenges he’s overcome mean he is keenly aware of just how important home, safety and community really are.

The Victoria city councillor, who was recently recognized as a “noteworthy historical figure” by Canadian Heritage as part of the Black History Month celebrations, says his experience fleeing his home in Somalia as an eight-year-old boy, then living in refugee camps and surviving war and unrest for nearly 20 years, have inspired him to fight for justice, equality and security.

“The most important thing for me is crucial: I want to work every day, collaboratively, with everyone to create communities where all members of the community feel safe, have quality and accessible care, dignity and quality of life at all stages of their life, they can reach their full potential, and where everyone is free to move or stay – and thrive,” Dubow said, adding that building systems in which local government can meaningfully engage residents – particularly the most vulnerable and those who have been historically marginalized – is deeply important to him.

Growing up in Somalia, Dubow said he enjoyed a happy, normal childhood. His parents divorced when he was six years old, an “unheard of” event at the time in his country, but one he speaks of with pride in describing how his mother stood up for what she wanted, even though it meant a challenging road ahead as a single mother. She went on to become a respected businesswoman in the community and inspired Dubow to be someone who “gives more than 100% in everything I do,” and a compassionate leader.

When Dubow was eight years old, the violence in the ongoing civil war intensified. Dubow’s mother pulled him and his sister out of bed one night and sent them in a boat to a refugee camp in Kenya.

“Being in a refugee camp, there is no access, no mobility, no movement,” Dubow recalled. “You can see the whole world, but you can’t move, you know?”

Five years later the camp was shut down, and Dubow’s sense of home and community was upended once again. With his mother and sister Dubow travelled to another refugee camp, this time in Ethiopia. He was able to catch up on his schooling but when a local uprising took hold in 2001, and the government started detaining students, Dubow’s mother sent him to live in Egypt.

He finished high school and was among the first graduating class from the Cape Breton University in Cairo – becoming the first in his family to earn a post-secondary degree. He worked with non-profit humanitarian organizations for several years, but was thrown into uncertainty once again at the onset of the Arab Spring in 2011.

“I could see the whole state collapsing, and it reminded me of the horrible violence I witnessed as a child in Somalia,” Dubow said. Organizations were evacuating their nationals but as an asylum seeker, Dubow had no such options.

“So in the middle of a revolution I had to go outside, check on vulnerable families,” he said. “It was a risk to go out, but we had to make sure we distributed money and food. To live in the middle of a riot – I can’t believe it sometimes when I walk the streets of Victoria.”

Dubow’s experiences of war, violence, housing insecurity and life as a refugee are why he has dedicated his life to create more just and equal communities.

“In my country of Canada, who gave me everything, and really advocate for the rights of the most vulnerable and Canadian values – how to take care of each other – that’s why I’m dedicating my life to that because of my experience.”

Dubow arrived in Canada, landing first in Winnipeg, and travelled throughout the country before settling in Victoria in 2012. He became a Canadian citizen in 2018 – the same year he was elected to Victoria city council as the first Black council member in more than 150 years.

Over the past four years Dubow has pursued a number of community-strengthening initiatives, including working with council to establish the Office of Equity, Inclusion and Diversity to combat systemic racism. Informed by his early Victoria days living in a backpacker hostel, Dubow also brought forward a motion that created a Rental Advisory Committee to advocate for more affordable housing options and to protect renters.

“We need programs and government incentives that are shaped for low-income families,” Dubow said. “We can’t assume people are all living in single family homes with a car or two. That just isn’t reality for most families; we need programs that benefit renters and transit users.”

Dubow declined to reveal whether he’ll run for council again in October, but said he wants to see the city partner with the co-op sector to create more secure, affordable housing. We have asked staff to work on a renoviction policy, and to formally prioritize housing affordability.

“I understand what it means to be in housing instability,” Dubow said. “But everybody doesn’t need to own a house if we invest in co-ops and housing affordability. We need to support the maintenance and renewal of existing co-ops and expanding that – making sure we’re building the right type of supply in our communities.”