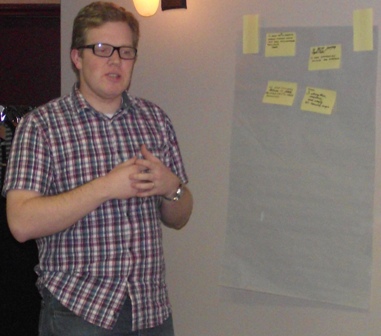 The Vancouver Island Council meeting on February 29 saw a great turnout of 19 people from 14 co-ops along with 4 guests.Island directors Larry LeSage and Nicole Chaland reported on federation finances, the International Year of Co-operatives, the new CHF BC Scholarship Fund and the creation of a new venture to help co-ops obtain financing for capital upgrades and and development as they approach the end of their government operating agreements.High energy and great ideas took centre stage as delegates worked together on a draft mission statement for CHF BC.Kerry Panter reported on the organics recycling program now available through BFI and invited members to check out the CHF BC website for information on upcoming education events and the tradeshow.Mark your calendars!  The next Council meeting will be held May 24.  We’ll be celebrating the tenth anniversary of the merger between CHF BC and VICHA Services.  Join us for the party!Photos below:Jeremy Coad (Heatheridge) working with a group on draft mission statement for CHF BC.Mary Woods (Pheasant Meadows) winner of Canuck hockey tickets courtesy of Grant Haddock.Island Director Nicole Chaland chats with Ruth McIntosh (Mitraniketan).