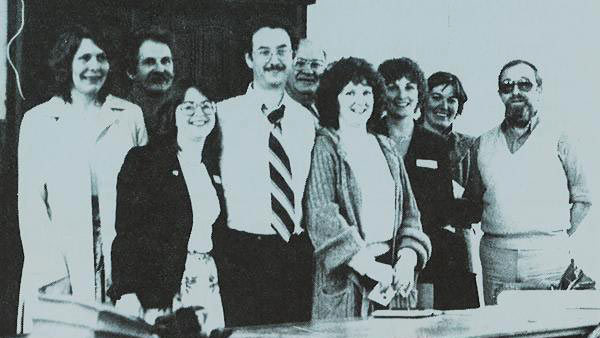 The Co-op Housing Federation of BC is celebrating its 35th anniversary and there’s no better way we’d like to do that than in the same spirit of growth and excitement that marked our beginning back in 1982. New co-ops are being built for the first time in decades, existing co-ops are coming up with innovative solutions to grow, redevelop and remain viable and new governments are ushering in an era of unprecedented housing support. None of it would be possible without the vision of our co-op pioneers and founding members, including Merrilee Robson and David Lach. We sat down with David and Merrilee on the eve of our anniversary to hear their insight into CHF BC’s history and what’s on the horizon.

In the early ‘80s co-op development was increasing rapidly and, while most were members of CHF Canada, it became clear there was a need for more local representation. Merrilee recalled drumming up support for a provincial body while at her first CHF Canada annual general meeting, where BC members agreed to keep meeting after the AGM was over. Communication back then was at a slower pace, but the word got out nonetheless. “We mailed people stuff,” Merrilee joked, and the message continued spreading through CHF Canada mailings and the Scoop newsletter. By the spring of 1982, members of 39 co-ops gathered to sign the incorporation documents and submit their $12 in annual dues to make CHF BC official.

“There was a lot of support for it,” said David, who served as CHF BC’s president from 1983 to ’84 and as the acting executive director in 2000. New and fledgling co-ops were “pretty desperate to get information,” added Merrilee, the founding director of the Trafalgar Co-op and former National Manager of Communications for CHF Canada. At the time, the national organization was heavily focused on new development and, once co-ops were built, members were essentially left to figure out the path forward on their own. It gave CHF BC a clear mandate that focused on education, lobbying and community relations for its members. When initial arrangements with private property management companies didn’t pan out as expected, COHO Management Services was formed in 1984. “It was a huge amount of work because we had no idea how to run a management company,” Merrilee said with a laugh.

Over the years CHF BC responded to a wide range of issues facing the co-op sector. “In the ‘80s it was getting organized, getting support, an office, then it was dispute resolution,” David said. There were lobbying efforts to keep replacement reserve funds from being “clawed back” for co-ops in the 56.1 program (now known as Section 95), and then to keep the federal government from pulling its co-op support in the early ‘90s when housing responsibility transferred to the provinces. We were successful in lobbying for support to help more than 60 leaky co-ops in the early 2000s, while more recent challenges include the revitalization of aging co-ops and the end of operating agreements. Throughout, CHF BC has worked to support its members with education, group buying and government relations to strengthen individual co-ops and the sector as a whole.

“The whole point of incorporation was to provide services to existing co-op members — that hasn’t changed,” David said, but the breadth of services has grown significantly to respond to changing needs. A decade ago David remarked that CHF BC’s 25 years of providing resources to the co-op sector had “accomplished all of what we hoped for, and more….But I miss the heady days of development.” As we prepare to open exciting new co-op developments engineered through partnerships and innovative funding models, it appears CHF BC has come full circle to those early days — with more to come. And while much has changed since then, our core mission of advocacy, education and support for the co-op sector remains as vital as ever.

What do you think our most important accomplishment has been in the past 35 years, and what should our most urgent priority be for the next 35? You tell us! Send us a happy birthday note — or a video! Email us at: socialmedia@chf.bc.ca.

Be sure to join us for CHF BC’s 35th AGM on Sunday, Nov. 19 at the Housing Central Conference at Richmond’s Sheraton Vancouver Airport hotel. Members can participate in the conference opening (visit housingcentral.ca) before the AGM, and stay for great entertainment and events throughout the day and into the evening with the Sector Supper. To celebrate our 35th anniversary, we’re offering complimentary registration for CHF BC members born in 1982 (with one paid registration). Registration for the conference and our AGM will be live at housingcentral.ca on August 28.