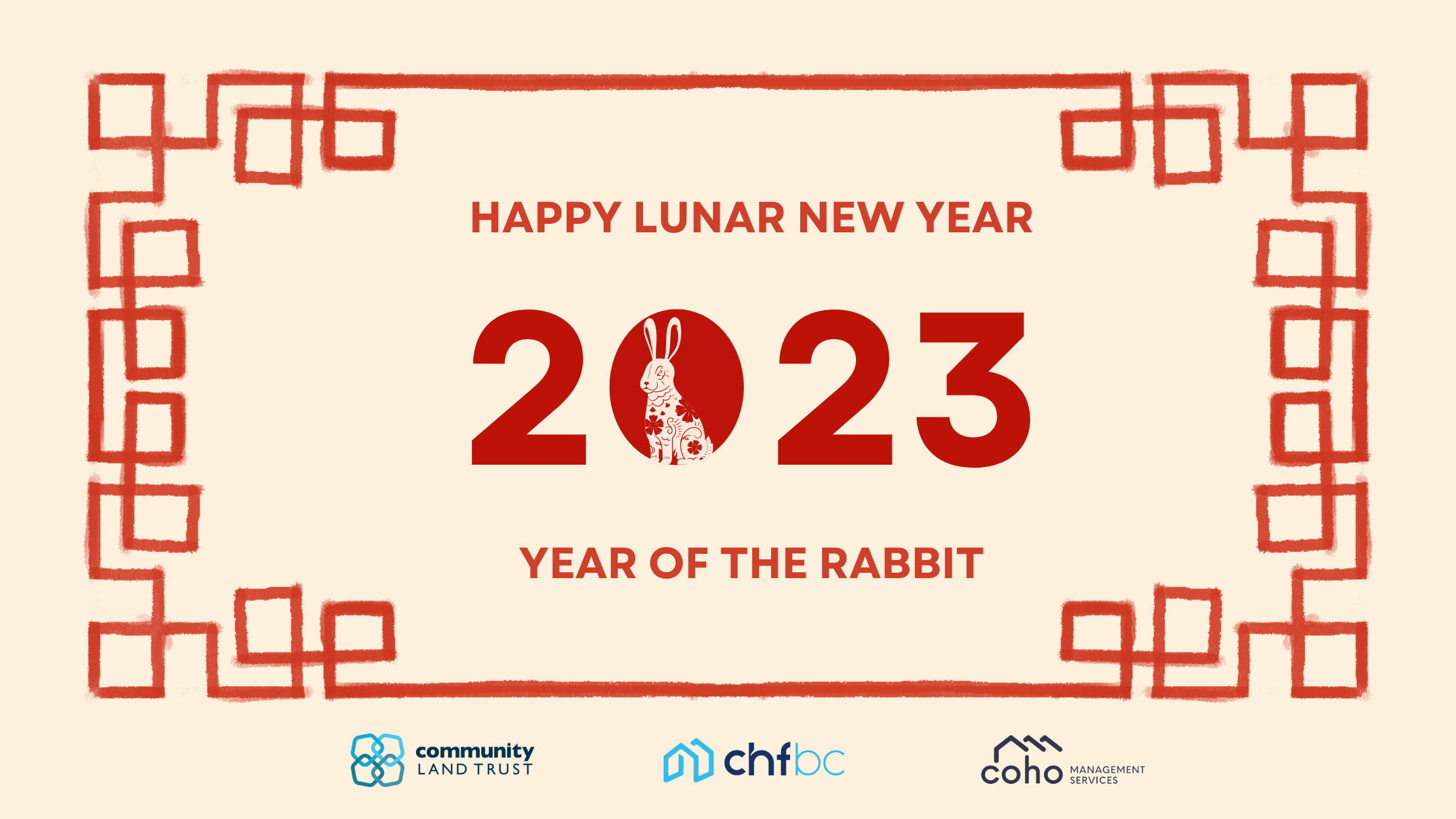 As the new moon appears in the sky on Sunday evening, the Lunar New Year begins welcoming the Year of the Rabbit.

During the 15 day festival, people spend time with family and friends and prepare for the coming year. Windows and doors of homes and offices are often decorated with red color paper-cuts and couplets with popular themes of “good fortune” or “happiness,” “wealth,” and “longevity.”

It is also a time when families come together, share a meal, exchange gifts and continue traditions that have been passed down for generations. Other activities include lighting firecrackers and giving money in red paper envelopes.

Although many Western nations refer to the Lunar New Year/Spring Festival holiday as Chinese New Year, it’s celebrated not just in Chinese communities but in other Asian cultures, including Vietnamese, Korean, Tibetan, and Mongolian. It is one of the most important celebrations of the year for many British Columbians, include housing co-op members.

CHF BC believes that celebrating diversity, be it gender, ability, ethnicity, religion, or sexual orientation, helps to create a vibrant community in which all individuals live in mutual respect and peace. Our members are homes to a multitude of cultures and languages from around the world, including large and diverse Asian-Canadian community.

Year of the Rabbit

The Rabbit symbolises longevity, positivity, auspiciousness, wittiness, cautiousness, cleverness, deftness and self-protection. People who were born in the Year of the Rabbit are vigilant, witty, and quick-minded, but people are said to have bad luck during their birth zodiac year.

The year 2023 is designated as a “Water Rabbit” year, which represents peace and prosperity, and it will be a year of hope. Each Chinese zodiac animal sign and one of the Five Elements are associated with each year in Chinese astrology: Metal, Water, Wood, Fire, or Earth. Your personality and destiny are considered to be influenced by the sign and element of your birth year. Every 60 years, element-sign combinations reoccur. If you were born under the “Water Rabbit,” sign and element, it is said that you are vigilant, humorous, perceptive, and inventive.

The Rabbit is the fourth of the 12 animals in the Chinese zodiac’s 12-year cycle. The 12 zodiac animals are, in order: Rat, Ox, Tiger, Rabbit, Dragon, Snake, Horse, Goat, Monkey, Rooster, Dog, and Pig. Each year is related to an animal sign according to a 12-year-cycle.