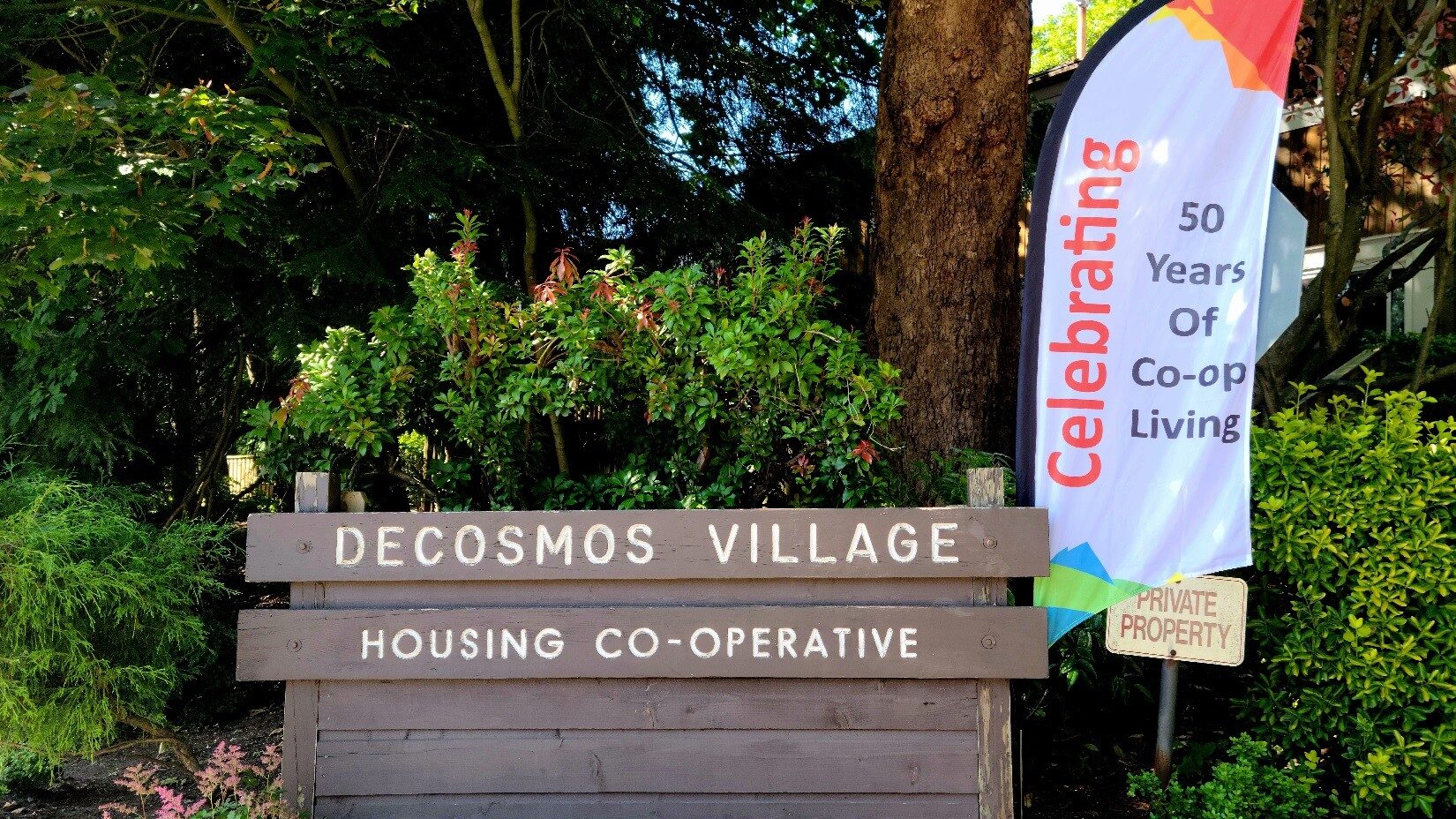 DeCosmos Village Housing Co-operative began under the name of the United Cooperative Housing Society. The first incorporators were drawn from the business community, credit union and co-operative managerial staff and the United Church. The incorporators were aware that a co-operative enterprise is both a philosophy and a business. The philosophy, being new to Vancouver, had to be supported with a solid financial and contractual framework that would result in houses.

With these considerations in mind the incorporators worked slowly and carefully. The British Columbia Federation of Labour and the Carpenters and Joiners Local 452 were each approached for funds. They put up $5,000. each to be considered a grant if the project did not reach construction, or a non-interest bearing loan if it did. The United Church provided a $100,000. In interim development financing at 6% interest.

The co-op was named in honour of Amor De Cosmos, the second Premier of BC, who was a glamourous and controversial figure in the history of BC. He was a man who strongly believed in personal freedom in an age of authority; a man who dressed flamboyantly in an age of somber styles. Perhaps he was too radical for his time but he was a man of vision and ability and the co-operative believed that his importance as a great British Columbian should be remembered. For these reasons this co-operative chose to name the co-operative De Cosmos Village.

Sod was turned in July 1971, construction was completed in the fall of 1972, all units 110 were occupied and there was a long waiting-list. A large scale housing project was not unique but this was a co-operative and the first venture of its type in Vancouver. Only families earning between $5,500 and $7,500 were eligible to become residents.

The co-op can’t mention their beginnings with acknowledging the work and driving force behind the project provided by Shirley Schmid.

At the beginning the monthly housing charges were set at these figures: 2 BR – $152; 3BR – $164; 4 BR $176. For the majority of the 50 years the co-operative financially supported its own subsidy program for low income members, due to limited external programs being available during those years.

Other ways DeCosmos was unique:

There have been many major changes over their 50 years, including some co-op wide upgrades such as flooring (3x), yard fences, porches, roofing, siding, window replacement, kitchen and bathroom renovations just to mention a few.

Two notable moments in the co-ops long history include:

Some information regarding the current membership:

Here is a quote from one of the original members who moved in 50 years ago, has lived there ever since, raised a family, and has welcomed grandchildren back to play.

The longevity of members, along with the return rate of adult children, is a strong indicator of what a great job this co-operative as done over the past 50 years in providing safe, secure and affordable housing in the City of Vancouver.

The co-op put co-op housing on the map in Vancouver, and were also significantly involved in establishing CHF BC. The growth in co-op housing in BC has continued ever since.

The co-operative will be celebrating its’ 50 years of success at a banquet to be held on September 24th at the Royal Palace Banquet Hall in Burnaby.

For more information on DeCosmos please contact Lorna Halle at 604 433 1973 or email Decosmos50th@gmail.com